We use images taken with a dedicated scanner to evaluate root growth and turnover. Our goal is to quantify the allocation of carbon to roots and its release to soil. 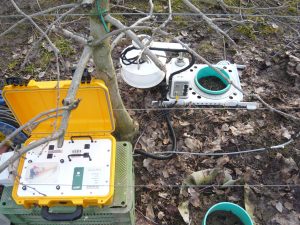 We measure soil respiration and we try to partition it between root, mycorrhizal and heterotrophic respiration by trenching soil monoliths to exclude roots and mycorrhizal hyphae. We are also using carbon stable isotopes to strengthen our findings. 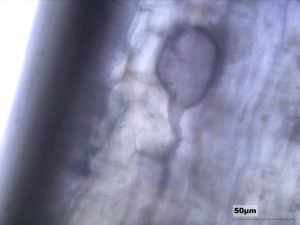 Arbuscular mycorrhizal fungi (AMF) are root symbiont obtaining carbon from the plant and returning nutrients and water to the plant.

Since several important agricultural crops can be colonized by AMF, among which apples and strawberries, mycorrhizal contribution to environment health is a particularly interesting topic in a region, like South Tyrol, where agriculture is highly developed.

It is known that mycorrhizal colonization:

Sustainability is currently an important issue in agriculture, thus it is critical to look for natural products, such as beneficial microorganism inocula, as an alternative to chemicals. In addition, the carbon absorbed by plants and accumulated belowground could contribute to improve the carbon storage capacity of agricultural systems. Though AMF role in carbon sequestration and nutrient cycle has been studied in several systems, no or little research on fruit crops in South Tyrol has been done.

We study the interaction between ectomycorrhizal and saprotrophic fungi and their nutritional habits through stable isotopes.

Most of perennial trees in temperate and boreal forests bear mycorrhizal fungi obtaining their carbon mainly from their plant symbionts while taking up nutrients from the soil. Since fungal isotopic signature is a consequence of several factors related to the source of nutrients, their chemistry, and fungal physiology, it has been used in ecological studies for its potential to explain nutritional dynamics in ecosystems.